Lila María Mercedes Mayoral Wirshing was born in Ponce on Dec. 5, 1942.  She was the daughter of Julita Wirshing Serrallés and industrialist Juan Eugenio Mayoral Renovales. Her father developed the formula for Don Q rum and was the founder of several businesses including Ponce Candy and Ponce Salt Industries.  Lila was the second of the four sisters: Julita Mercedes, Lila, Ana Inés and Eugenia. Julita Mercedes graduated from Dana Hall in 1955.

The 1959 Focus called the Junior Class “outstanding” not only for its record breaking 129 members but for its enthusiastic spirit and lively participation in school activities.  Hailed in its class song as the “best class of the rest past” and “united as one,” the Class of 1960 reigned supreme in voluntary sports and inter-class competitions.  The traditional Revels celebration, a suspenseful SPREAD, an experimental junior dance, and the junior party were the highlights of this fun filled year for the Class of 1960. Lila was president of the Spanish Club in her junior year.

Rafael Hernández Colón was a member of a political group of 22 young men known as “The 22.”  They wanted new leadership in the Popular Democratic Party (PDP), the party that advocated for Puerto Rico’s continued self-government as a Commonwealth of the United States.  Hernández Colón was elected to the Senate of Puerto Rico in 1968, and in 1969 became the Senate President and the President of the PDP.  In 1973 he upset Governor Luis A. Ferré Aguayo by an overwhelming margin of 90,000 votes to become the fourth popularly elected Governor of Puerto Rico. (Luis Ferré Aguayo was the founder of the New Progressive Party, which supported statehood for Puerto Rico. He was coincidentally the father of Dana alumna Rosario Ferré 1956.)

Lila Mayoral was affectionately known as Doña Lila. She captured the hearts of Puerto Ricans with her compassion, kindness and generosity. Doña Lila was an active first lady initiating, many projects that improved the quality of life for many Puerto Ricans.  Her support was important to her husband’s political success. Hernández Colón served three terms as governor, from 1973-1977 and from 1985-1993.  They lived in La Fortaleza (The Fortress) in San Juan, the official residence of the Governor and First Lady. (It is the oldest executive mansion in continuous use in the New World and is an UNESCO World Heritage Site.)  When her husband was between terms, Lila Mayoral returned to school and received a bachelor’s degree in business administration from the Universidad del Sagrado Corazón (University of the Sacred Heart) in San Juan. They had four children: Rafael, José Alfredo, Dora Mercedes and Juan Eugenio.

As First Lady Lila Mayoral was committed to helping Puerto Ricans when disaster struck.  In 1975 the torrential rainfall from Hurricane Eloise caused extensive flooding in dozens of villages.  Over 5,000 people were left homeless. Doña Lila organized a concert with Spanish singer Julio Iglesias to benefit the victims of this disaster.  Ten years later the floods of 1985 caused a deadly landslide in the Mameyes neighborhood of barrio Portugués Urbano in Ponce that destroyed 90 houses and killed about 130 people.  Lila Mayoral convinced the government to build cement houses for the victims of this storm instead of replacing their homes with less sturdy wood-frame homes. When Hurricane Hugo devastated the east coast of Puerto Rico in 1989 she was the liaison between the government and community efforts to assist thousands of needy families.  Doña Lila visited each of the affected towns and spent time cheering up the children. She was president of the board of directors of “Dale la Mano a Puerto Rico” (Give a Hand to Puerto Rico), an organization that sponsored a marathon to benefit the victims and raised $15.6 million in aid.

Lila Mayoral saw the devastation to the countryside caused by the many natural disasters and became a strong advocate for reforestation.  She would always plant a tree at the schools she visited, and led reforestation efforts on the island, especially along roadways.  To improve the urban environment, she had ornamental plants and trees planted in the public areas of cities and towns throughout Puerto Rico.

One of Doña Lila most important achievements was the program “Abre tus Ojos a un Mundo sin Drogas” (Open your Eyes to a World without Drugs).  Students were encouraged to create artwork such as poetry, posters, and theatrical presentations based on anti-drug themes. The artworks were judged by Puerto Rician celebrities, and prizes and awards were given to the winners by the celebrities and Doña Lila. She took 15 students to Miami to participate in the Drug Prevention Congress, and joined Nancy Reagan in her anti-drug campaign. The First Lady visited AIDS centers to speak with and distribute food and clothing to people and families living with HIV.  She also went to schools to talk to students about AIDS prevention.

Doña Lila worked with many charities, especially those that helped children.  During her time as First Lady she promoted the establishment of more than 100 daycare centers at government agencies.  She oversaw the donation of 10 furnished homes to house abandoned girls from Hogar Ángeles Custodios (Home Guardian Angels).  At the Three Kings’ Day celebrations held at La Fortaleza, Lila Mayoral helped to hand out thousands of gifts to children and families.

Lila Mayoral received many awards and honors during her lifetime.  These are just a few: 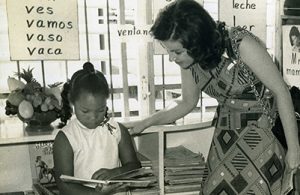 Many organizations honored Lila Mayoral’s compassion and interest in educating children. The San Franscisco Center in Ponce named a building after her where classes are offered to students from kindergarten to fourth grade.  Escuela Lila María Mercedes Mayoral, a public school in Ponce for students in grades 9-12, was named in her honor. The Lila Mayoral Wirshing Children’s Library for children 3-8 years old is located at the Fundación Biblioteca Rafael Hernández Colón in Ponce with the goal of educating children in ethical and civic values so they can contribute to making a better society.

When Lila Mayoral died on January 7, 2003 Governor Sila Maria Calderón declared 3 days of mourning. Flags from the United States and Puerto Rico were flown at half mast from all government agencies.  Governor Calderón eulogized, “I share the grief that all Puerto Ricans feel … [given] the loss of this person who was so beloved by all.  The people of Puerto Rico always will remember the simplicity, kindness and generosity that characterized this great woman.”[1]

#tbt to Harvard Law Professor Lani Guinier at her